Do We Need to Wait for 5G to Connect the Massive Internet of Things?

LTE IoT , or LPWA, is being deployed globally today to become the initial solution to meet the 5G massive IoT requirements. We envision 5G NR to support IoT by leveraging the continued LTE IoT evolution — by enabling in-band deployment of eMTC and NB-IoT in 5G spectrum.

Our vision for 5G is a unified fabric that will connect virtually everything around us, and recently in late December 2017, the entire mobile industry made a huge stride toward making this vision a reality with the completion of the first 5G NR standard in 3GPP. This was a significant milestone that not only sets the course to bring commercial 5G NR enhanced mobile broadband (eMBB) deployments in 2019, but it also establishes the technology foundation for expanding 5G to virtually every industry, every object, and every connection.

5G will transform a wide range of industries and is expected to generate more than $12T in economic value by 2035. This includes delivering next-gen eMBB services such as immersive XR, as well as expanding into new use cases beyond mobile broadband. But we don’t have to wait for 5G NR to fully proliferate to connect new industries as the expansion starts today with LTE. In fact, LTE Advanced Pro  will be submitted along with 5G NR to fully meet the IMT-2020 5G requirements. Today, LTE Advanced Pro already provides the ubiquitous coverage and many foundational services essential to 5G.

To address the growing demand of connecting low-complexity, low-power devices to the wide-area mobile network, LTE IoT was introduced in 3GPP Release 13 as part of the LTE Advanced Pro platform. It is a suite of two narrowband technologies — eMTC and NB-IoT, that scales down device and network complexity, maximizes battery life, extends range, and increases device density. eMTC and NB-IoT provide a complementary cellular solution to connect anything from environmental sensors and utility meters to asset trackers and wearables. Today, more than 50 mobile operators and service providers are committed in deploying Cat-M1 and/or Cat-NB1 networks, which already started to connect the massive IoT in 2017.

Figure 2: Global deployments of Cat-M1 and Cat-NB1 networks as of April 2018

LTE IoT continues to evolve, bringing new capabilities and efficiencies. Release 14 introduced positioning and broadcast, while also adding new device categories — Cat-M2 and Cat-NB2. Release 15, scheduled for finalization in June this year, will add TDD support for NB-IoT, as well as many power-optimizing features such as wakeup radio and early data transmission. 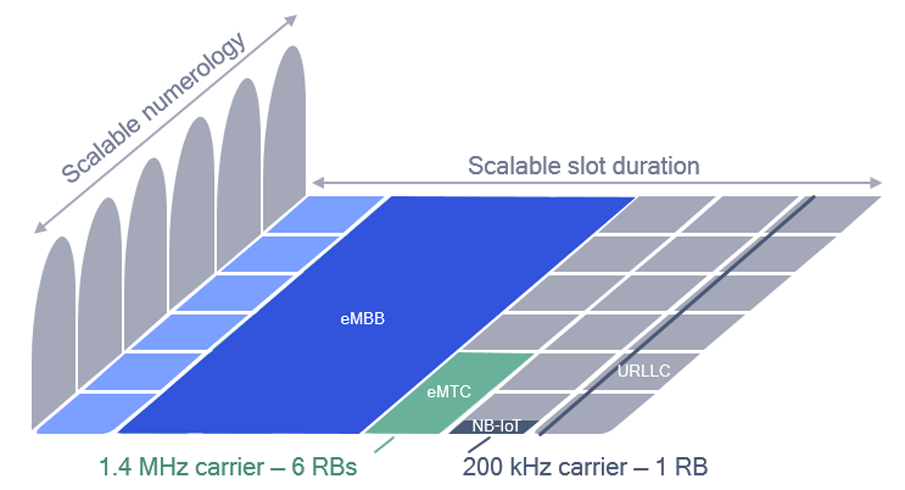 In addition, exciting enhancements are possible for both LTE IoT and 5G NR IoT in Release 16 and beyond. This includes non-orthogonal multiple access (NOMA) that can further increase device density and network efficiency. In fact, NOMA is already an approved 5G NR Study Item in Release 15. In addition, grant-free uplink will allow IoT devices to send sporadic small data bursts to the network without scheduling, thereby reducing overhead for more efficient handling of IoT communication. Another area of interest is the concept of mesh networking with WAN management, which helps with extending range and optimizing device cost.

Figure 4: Continued LTE IoT evolution in Release 13 and beyond

And LTE IoT is just one example of how LTE Advanced Pro is accelerating the mobile ecosystem expansion beyond smartphones. Here are a few others that are essential to LTE evolution in the 5G Era.

Cellular Vehicles to Everything (C-V2X)

With the push toward autonomous vehicles heating up, enabling vehicles to communicate directly with everything around them (even beyond the line-of-sight) has become more important than ever. Release 14 C-V2X established the foundation for safety use cases, and the continued evolution with 5G NR-based C-V2X will enable use cases for autonomous driving such as intention sharing, high-throughput sensor sharing, and wideband ranging and positioning. For more information, visit our C-V2X website.

We are at the beginning of the 4th industrial revolution, or commonly referred to as “Industrial 4.0,” empowered by connected IoT that is poised to disrupt and transform segments ranging from transportation hubs and shipping ports to manufacturing and power plants. Creating a locally managed LTE network with dedicated equipment can enable a wide variety of customized services, and future private 5G NR network will enable advanced services such as industrial-grade wireless ethernet leveraging Ultra Reliable Low Latency Communication (URLLC). For more information, visit our Private LTE Network website.

And let’s not forget another key LTE Advanced Pro technology in Release 13 — LAA (Licensed Assisted Access). Not only is it essential to enable global deployments of Gigabit LTE, now with more than 40 commercial deployments in 25 countries, but it also establishes a solid foundation for 5G NR spectrum sharing — an approved 5G NR Release 15 Study Item — that will bring new spectrum efficiencies and enable new use cases. The LAA small cells used for Gigabit LTE can also be fully leveraged to achieve significant 5G NR mmWave coverage via co-siting.